A few years ago my friend Mark and I were eating lunch outside at a picnic table on a sunny day in San Francisco. We were talking about work, stress, life, wellbeing and happiness. Mark said that once we have all of our basic needs covered (food, water, safety etc) there are 3 things people need to be happy: something to do, someone to love and something to look forward to. An important thing to notice here is that none of these three things involve having. They’re all about wanting. “Something to do” is about wanting to accomplish whatever it is you’re doing and “something to look forward to” is about wanting something to happen. “Someone to love” is less straightforward but love and want are actually fairly similar feelings. Both words even translate to the same word in Spanish: Querer. How come we need to want something to be happy? Louis CK calls it your forever empty, the Buddhists call it dukkha, I like to call it your Want Monster. Your Want Monster is a little guy inside you that’s always hungry for more. The trick is not to silence or ignore your Want Monster but to feed him a healthy diet and learn to live happily along side him.

If you think about it in terms of evolutionary biology it makes sense we are always wanting. Imagine you had two cavemen. They both go out and pick a banana and come back to their caves. Caveman Bob is happy with his banana. Caveman Joe feels a like he wants just a little bit more. The caveman who wanted more “stuff” would end up stronger and more fit for survival. After many generations this feeling of emptiness prevailed throughout or species. An appetite for social gratification would be favorable as well. Imagine caveman Joe tells caveman Bob “Hey dude don’t go west of the banana tree there’s lions over there,” or, “I hear cavelady Susan thinks you’re cute.” Both would help humans survive and reproduce more. The more hunger they had for social interaction the more fit they’d be to survive.

People also like recognizing patterns. I suspect that’s the result of evolution as well. If caveman Bob noticed a lion came out after it rained he might recognize that pattern and stay inside after it rains. If a caveman noticed his buddy got sick from eating red berries he’s probably not going to eat the red berries. I suspect our love of art and music is rooted in our love of patterns as well. If you believe in evolutionary biology then it follows that almost everything we desire is a result of how we evolved. Some of these things no longer contribute to our success as a individuals or as a species. A Want Monster has evolved inside each of us, but there’s not much of a need for him anymore. So, how do we keep him satisfied?

There are all sorts of things you can do to feed you Want Monster. You can work, exercise, make art, make and eat food, socialize, get laid, etc. Feeding your Want Monster sounds fun! What I think makes a lot of people unhappy is realizing that after you feed your Want Monster he’s still going to get hungry again. We’re taught that sadness and emptiness are dirty feelings that need to be avoided. This isn’t true. Sadness and emptiness are necessary to feel joy. 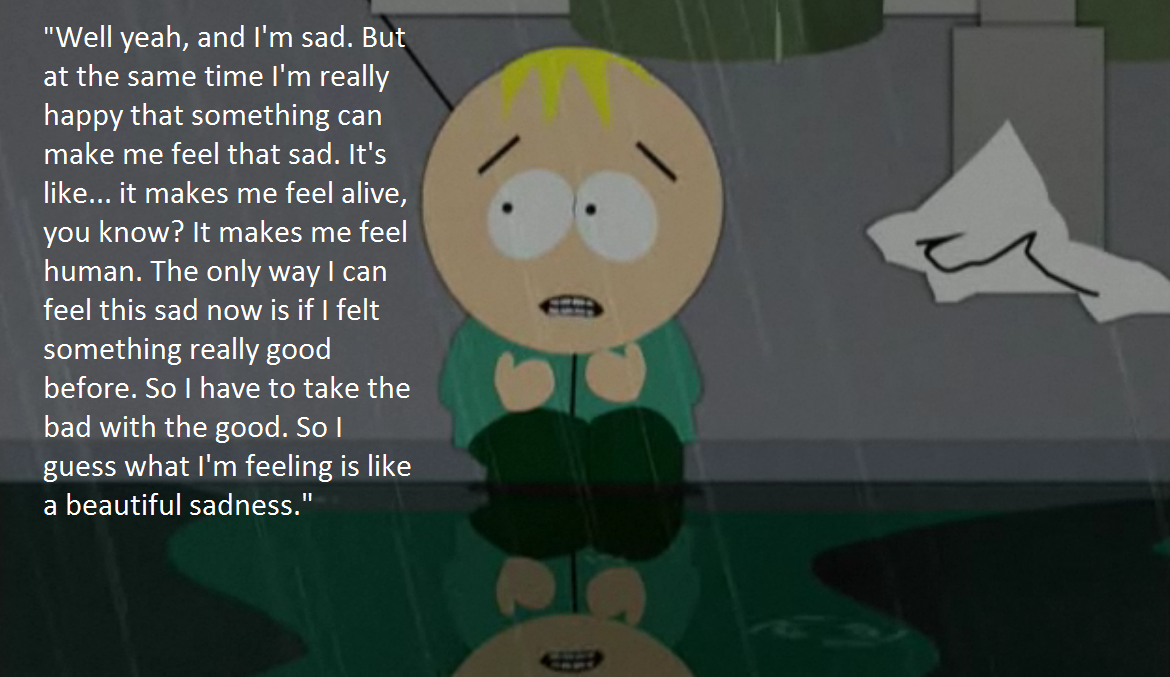 Just like with people food, Want Monster food isn’t all healthy. Portion size is also important. I like to think of different types of happiness like different food groups. The happiness and instant gratification we get from social media is sort of like the sugars and fats of happiness. Looking at Facebook is like force feeding your Want Monster five Cheesy Gordita Crunches from Taco Bell. He won’t be hungry after but he sure as hell isn’t going to feel very good either. We’ve never had so much access to so much social and mental stimulus and we’re becoming desensitized to it. Social media is ruining social gratification just like internet porn is ruining sex. Overfeeding your Want Monster sugary fatty happiness is not going to make him go away. It’s going to make him sick. Technology has given us much easier access to pleasure and counterintuitively that’s making us less happy.

It’s not healthy to starve your Want Monster either. If you do, you’ll get depressed. Sometimes this is out of your control, however, making things better isn’t. Antidepressants are commonly prescribed to correct chemical imbalances in the brain. People can also exercise, socialize, eat healthy food and/or do other activities which will get your Want Monster feeling healthy again. 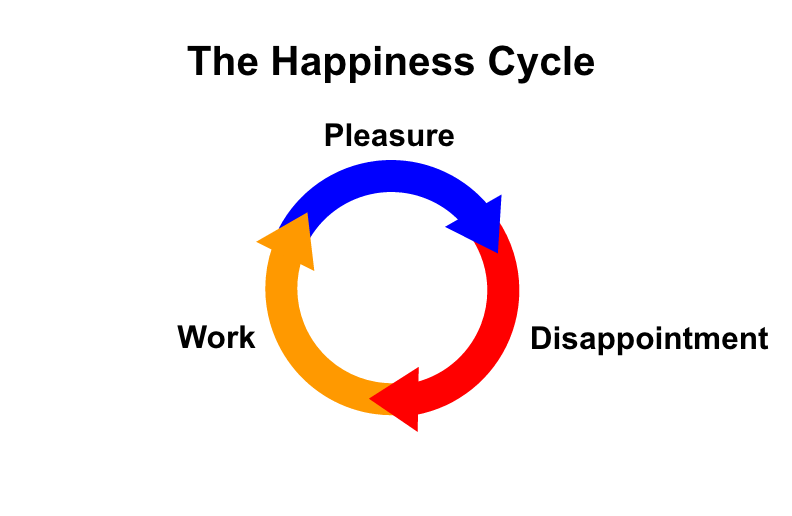 Happiness is much more of a cycle than it is a state (See the figure above). Pleasure is just one phase of the cycle. Listening to music is a good example of this. Most of the time while listening you’re waiting for the chorus. When it finally comes you getting a feeling of relief and pleasure. Does that mean if you just listen to the chorus over and over again you’d get the same feeling? Probably not. Brené Brown gave a great TED Talk about the power of vulnerability. If you’re at all interested in the study of happiness I’d definitely give it a watch! In it she says we are “the most medicated, in debt, addicted and obese nation in the world.” She explains that we can’t numb sadness and pain without numbing happiness as well. Feeling sad is a natural part of being human. Or, as one of my running coaches put it: embrace the suck.

Throughout human history we have told each other tales of true happiness. One of my favorites is The Princess Bride. Like in most fairy tales Westley and Buttercup live happily ever after. It’s a nice way to end the story but what the hell does that even mean? Does he have a job? What’s their sex life like? The truth is, happiness isn’t about rescuing Princess Buttercup or Avenging your father’s death. It’s about battling rodents of unusual size in the fire swamp. It’s about storming the castle. It’s about the adventure along the way.

With your balanced happiness diet of exercise, acceptance, pain and suffering hopefully you and your Want Monster can get along a live a long and happy life together.

Thanks Emma Conley for making suggestions and helping edit this post!